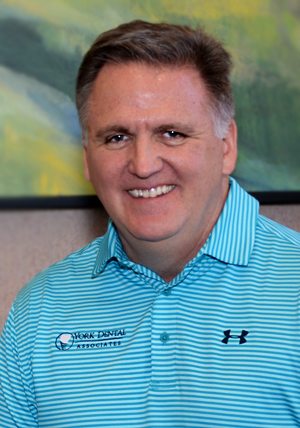 Born and raised in York, Nebraska, Dr. Perry Rosenau graduated from York High School in 1979, graduated with a Bachelor of Science in Biology from the University of Nebraska Lincoln in 1984 and received his Doctor of Dental Surgery degree from University of Nebraska Medical Center College of Dentistry in 1988. Dr. Rosenau completed a one year general practice residency at Emory University.

Dr Rosenau has continued his education over the years to make sure the latest technologies and treatments in dentistry are available to his patients. Dental care including; cosmetic dentistry, crown and bridge, implant restorations, dentures, root canal treatment and minors oral surgery for adults and children.

Married to his college sweetheart, Jane in 1990, the Rosenau’s have two daughters Alexa and Aleah. He is deeply devoted to his family and is proud to be active in his children’s very active lives. In his free time Dr Rosenau enjoys watching his daughters play volleyball, traveling, photography, woodworking and an occasional game of golf.

Our friendly staff is ready to schedule your next appointment. Give us a call today at 402-362-5846 to speak with us.